Those of you who read this blog will know I’m a planner. I like to do my own research when identifying new and interesting venues to try out, and there’s nothing that makes me want to run for the hills more than the notion of just ‘winging it’. Rightfully, I tend to be very precious about where I spend my time when travelling, and while I have nothing against being adventurous or spontaneous, I tend to be particularly fussy about where I eat. This becomes especially problematic when you’re on a tiny island with limited choice, requiring even more meticulous research to find those undiscovered gems.

After being spoilt by two fantastic visits to Matsuhisa at the beginning of our trip, we now had the dilemma of finding anywhere that could hold its own against this experience. And after a particularly awful dinner at a style-over-substance establishment, which had been billed by many as a worthy dining option for the discerning, I got a little stuck. The other Mr. Highlife, who likes nothing more than being spontaneous and spur of the moment, convinced me that perhaps too much planning wasn’t the order of the day. And so one stifling hot evening as we traipsed along the cobbled lanes of Mykonos Old Town, he made an inspiring choice by randomly selecting Nautilus.

What a find this restaurant turned out to be. The charming proprietor/maitre ‘d (Irina I believe?) was chatty, attentive and had great presence. She clearly knew her target market, creating a typical Greek taverna atmosphere made thoroughly contemporary without losing its identity. A mixture of outdoor and indoor tables tables were looked after by the cheerful Nautilus staff, who were equally efficient and friendly. They served us the freshest octopus carpaccio, practically melting in the mouth with every bitefull, followed by a straight-out-of-the-sea grilled dorado with rosemary potatoes, which we washed down with a bone-dry Hatzidakis Assyrtiko from Santorini.

The Verdict
Nautilus was the surprise dining experience of Mykonos, and one that’s not to be missed. 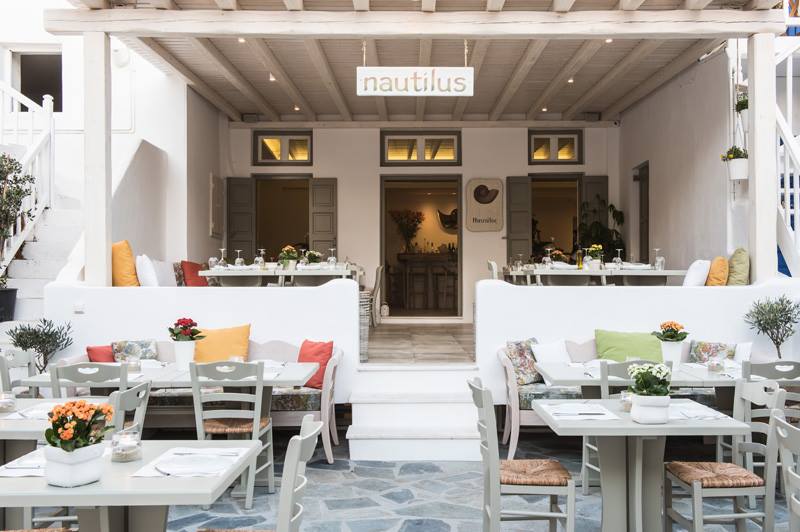