High on my wish-list of Peruvian fine dining was experiencing dinner at Maido Lima. A permanent fixture on the San Pellegrino list of the world’s best restaurants (No. 2 in Latin America and No.13 in the world ranking to be precise), the ‘Nikkei‘ experience was something I could commit to as an enthusiastic admirer of Japanese cuisine. And enjoy we did, despite sabotaging the experience for ourselves by succumbing to a late afternoon gorge on ceviche and French patisserie courtesy of the Hilton club lounge. Unfortunately by the time we got to Maido Lima, neither one of us could bear the thought of sitting through the signature 15-course Nikkei Experience tasting menu, which was a missed opportunity. First-world problems…

The Backstory
Blending the best of two very distinctive cuisines would be a tall order for anyone, but Lima-born chef Mitsuharu Tsumura delivers on that promise with gusto. Mixing rare ingredients from the Amazon jungle with Peruvian staples like quinoa and corn, his cuisine expertly teams the exotic with the delicate flavours and techniques of Japanese cooking. Peru has strong ties with Japan, which is most evident in the sizeable Japanese community you’ll encounter across parts of the country. Japanese workers first came to Peru in the late 1800’s to work in the agricultural industry. Many stayed on, building new lives and businesses for themselves in their adoptive homeland, and it’s this Japanese diaspora we have to thank for what’s been dubbed as Nikkei cuisine. 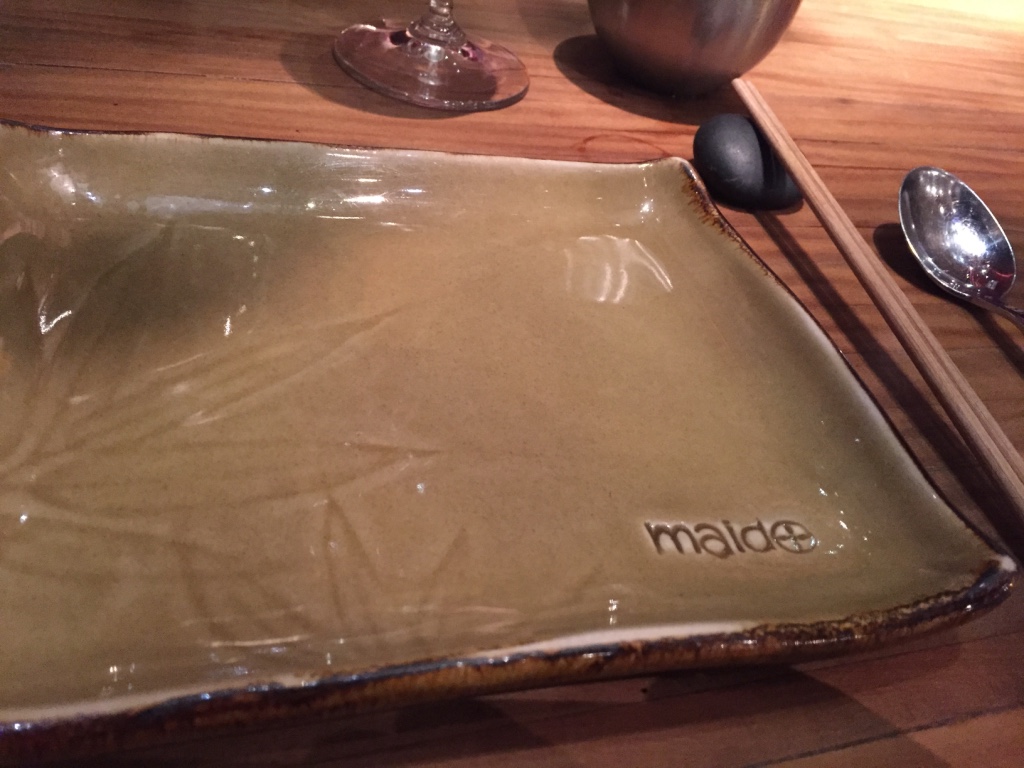 The Setting
Maido Lima was conveniently located a few blocks from our hotel in Miraflores, so given the balmy evening, we decided to walk the few blocks to the restaurant. Situated on a corner plot in a multi-level glass, concrete and wood-clad building, we were once again reminded of the restaurant’s affiliation with the San Pellegrino list, thanks to the shiny plaque greeting diners at the entrance. There was an unmanned host station just inside entry, so we simply took the stairs up to the main restaurant. Here we were greeted by the customary irasshaimase! chorus, courtesy of the army of chefs manning the compact sushi station. The rest of the main dining area and bar is a homage to simplicity and warm wood tones, while the room is practically dominated by a rather unique art installation. Hanging from the ceiling in precise formation were thick lengths of rope, and thanks to clever lighting, the visual effect is either the appearance of the national flag of Peru or Japan. From our vantage point, we had the unmistakable rising red sun. 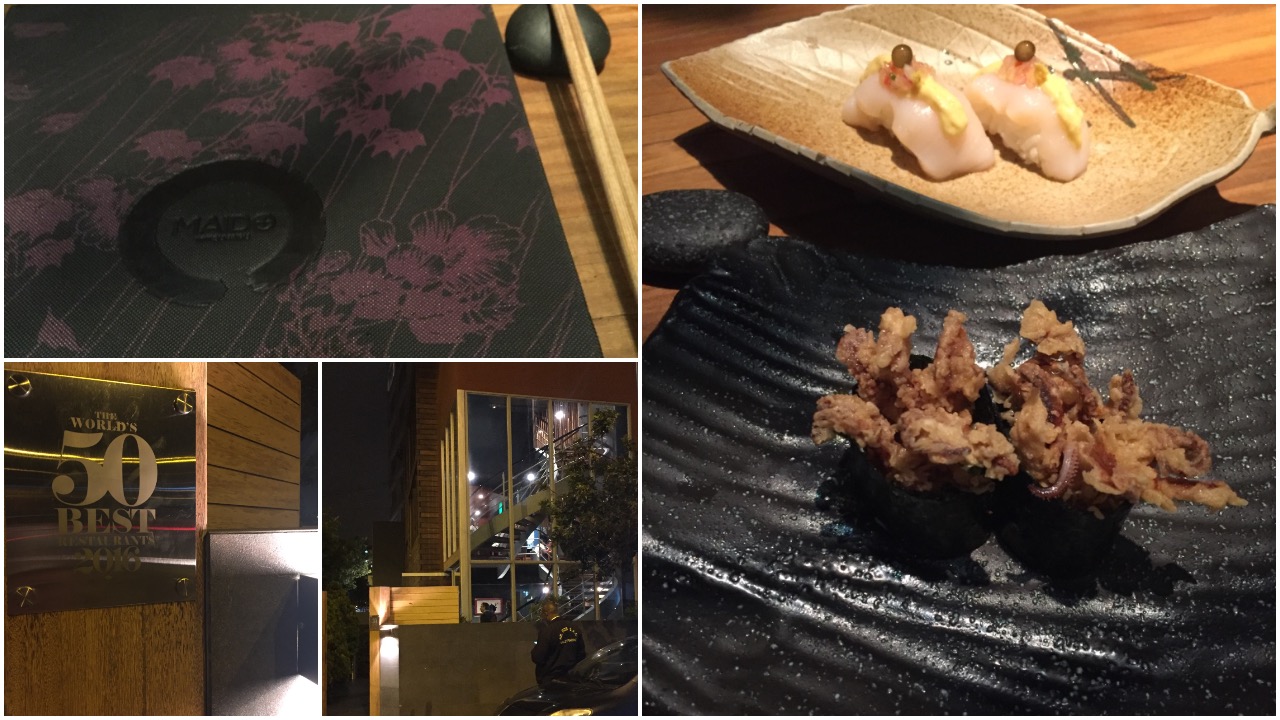 The Food
While I had every intention of indulging in the tasting menu, the reality of eating an ocean of ceviche earlier in the day meant a la carte was really the only viable option. Our waiter naturally brought both menus to the table, explaining the different dining experiences and then promptly took our drink orders. We decided on a combination of some of our usual favourites, with concessions to make sure we tried Maido’s signature dishes, skipping wine (pricey) and sake (limited) in favour of Japanese beer. As I watched plate after plate of what can only be described as delicate works of food art land on tables surrounding us, I found myself getting a serious case of food envy and mild annoyance. 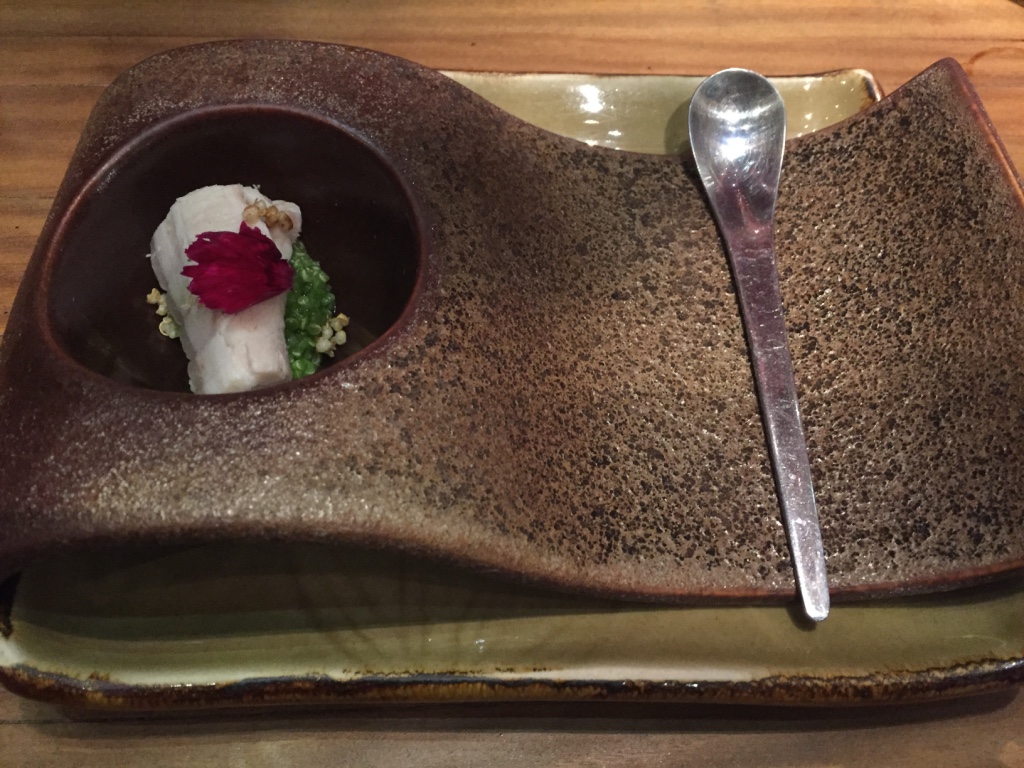 We were offered a small amuse consisting of rich tofu topped with quinoa. This tasted wonderfully creamy, and the crunch of the grains created an interesting texture. A traditional wakame sarada (seaweed salad with sesame oil, mirin and aji) was as expected, while the ‘Cevichero‘ maki rolls with ebufarai, avocado and chalaca came with a side of delicious crispy squid. 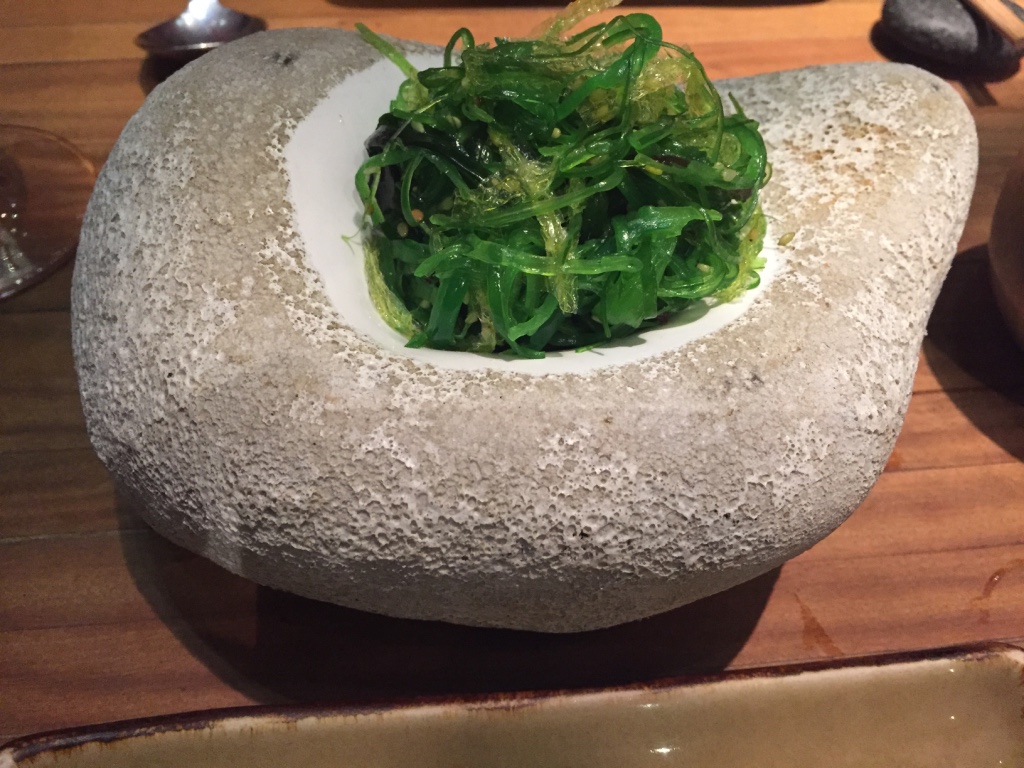 But the main highlight of the meal came in the form of two of Maido Lima’s signature dishes; the ‘Amazing Scallops‘ hailing from Paracas (a seaside coastal town south of Lima) and the ‘Nikkei Ceviche‘. The traditional marinade used to cure ceviche is commonly referred to as ‘tiger’s milk‘ a fiery, citrus based dressing containing chillies and onions. A staple of Peruvian cooking, it gave the scallops a gentle kick without overpowering the dish. Simply divine. The latter however was a masterclass in flavour, with the tiger’s milk further enhanced with dashi, ginger, cilantro and that other Peruvian mainstay – corn. Tremendously enjoyable and most definitely my favourite dish of the meal. 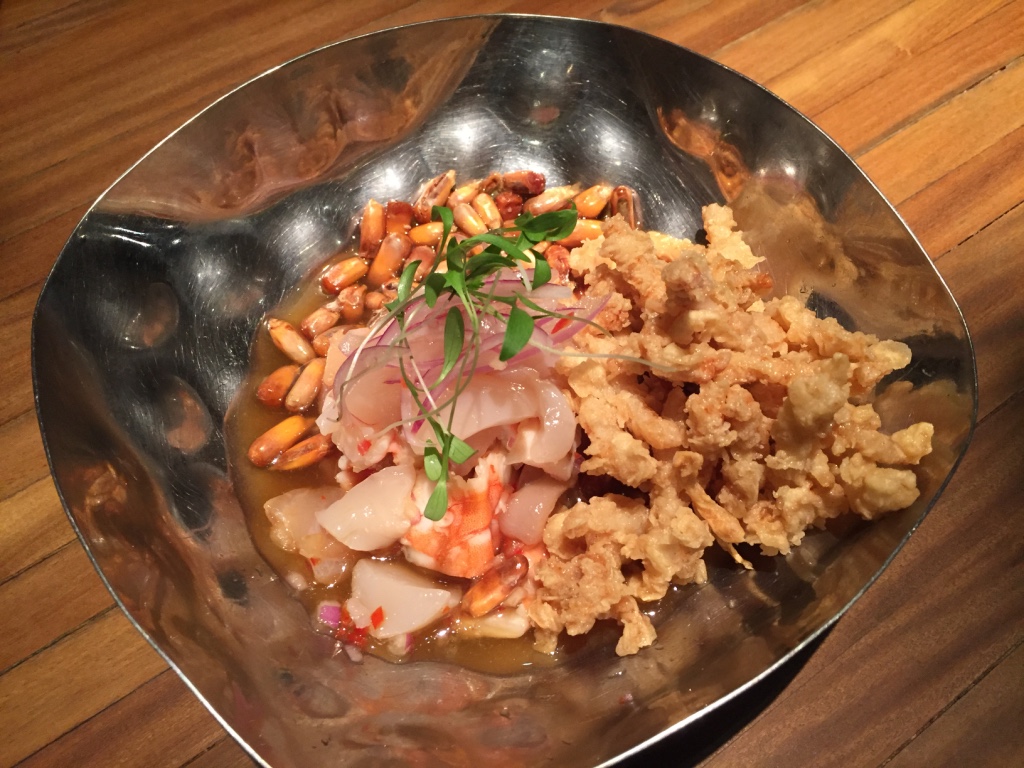 The Verdict
‘Maido‘ loosely translates to ‘every time‘ in Japanese. Trust me, I’d need no convincing to make Maido Lima my choice of venue every time I was in the mood for Nikkei cuisine. Interestingly, similar to the observation I made at Astrid y Gaston the previous evening, the dining scene in Lima seems to encourage casual dressing. It’s a minor point, and without intending to sound like an etiquette snob, I was once again taken aback by how little an effort patrons make when dining at high-end restaurants. 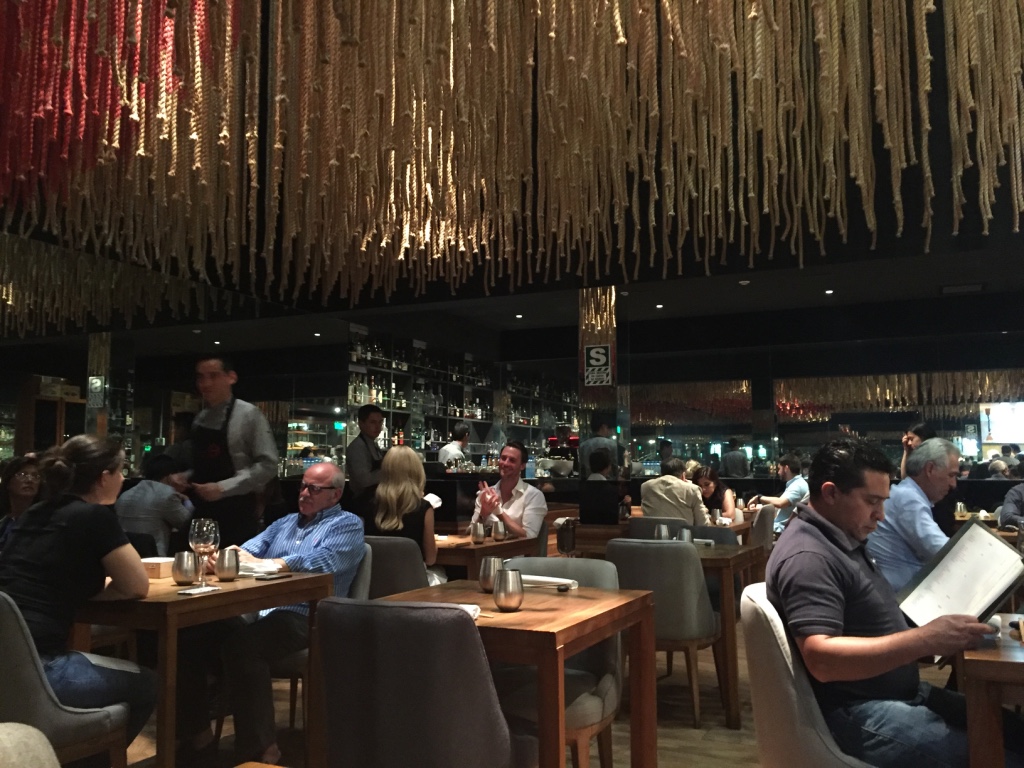 If you love Japanese food, then you’re in for a treat, and I would highly recommend you endure the 15-course Nikkei tasting menu. There’s a brisk pace to the service and the bite-sized portions will give you a whirlwind tour of chef Mitsuharu Tsumura unique vision. This is my one regret in what was otherwise a highly enjoyable meal.